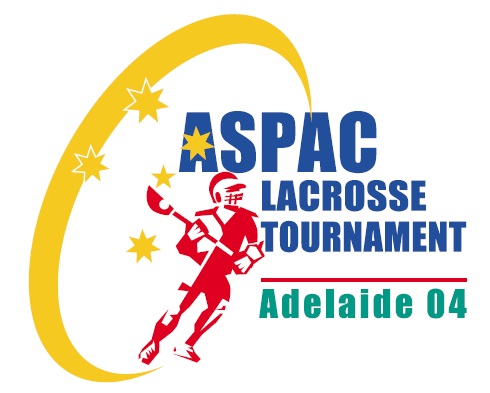 It was following the International Lacrosse Federation’s (ILF) Men’s World Series in Perth, Western Australia in 2002 that the concept of holding “a tournament with an international focus in Adelaide” be conducted. It was agreed that one of the reasons for the tournament would be to “foster lacrosse in the Asia Pacific region”, but teams would also be invited from Western Canada and Western U.S.A. to give the competition some additional strength.

In April 2003 letters were sent to lacrosse associations in the Asia Pacific Region for ‘Expressions of Interest to participate,’ and there were enough positive replies received for the Lacrosse South Australia Board to consider it would be a worthwhile venture.

After rapid responses from Australia (3 Development Teams), New Zealand (1 team) and Hong Kong (1 team) the numbers gradually grew thereby ensuring there would be a sufficient number of teams to make it a true competition. 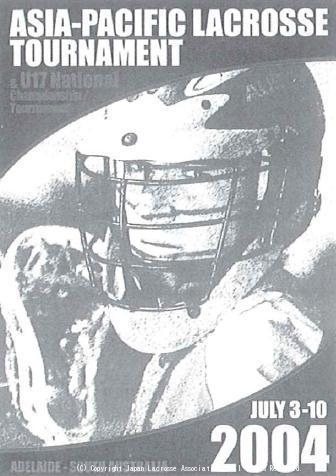 The U17 Lacrosse Australia’s Boy’s National Championship was conducted at the same time.

The initial ASPAC Championship in South Australia in 2004 was a men’s only invitational tournament played at the Glenelg Lacrosse Club’s facilities at Barratt Reserve. Nearby accommodation was at the Adelaide Shores Holiday Village where all the overseas and Australian teams stayed plus the referees. Coordinator of the event was Helen Keane and the Referee in Chief was Peter Noble.
At a meeting of representatives on 6 July 2004 it was agreed that an Asia Pacific Lacrosse Union be organized, and there be competition between Asia Pacific countries every two years (initially men only) with goals being to:

It was also agreed that each country should decide the grade of team they would send and this should be determined by the Governing body of each country. Recognition was made at this time of the strength of Australia and Japan in this region and both countries therefore agreed that future teams would be under age/developmental.

With the ILF preferring the ASPAC Championships not to clash with the Men’s World Series nor the Men’s U19 World Championships it was agreed that the next ASPACs would be in 2005, and alternate years from thereon. This of course has now resulted in a clash with women’s world events at both the senior and U19 level. With talks to be held with the President of the International Federation of Women’s Lacrosse Associations (IFWLA), Fiona Clark, future participation would depend of the outcome of these discussions and a decision by the host country as to whether a women’s competition would be included. Japan was then named hosts of the next ASPACs. 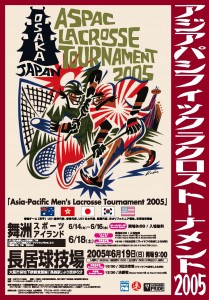 It was one year later, in the early June of 2005 that Maishima Sports Island, Osaka, Japan, became the site of the 2nd ASPAC Championship which saw 6 Men’s teams participating in a round robin competition over a 6-day period from 14-19 June. These teams included two from the USA/USA West & USA California (both on the Pacific Rim), an Australian and Japanese U21 team, Korea and Hong Kong. An invitation was also extended to women’s teams from member nations. 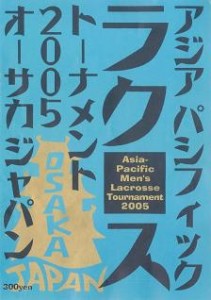 Kou Teramoto a Director of the Western Division of the Japan Lacrosse Association (JLA) was named Coordinator for this event. Osaka was, and continues to be renowned for its commitment to international exchanges and at that time had hosted more than ten international lacrosse events. The number of teams in Osaka area exceeded 100, making Osaka the second biggest lacrosse community in Japan after Tokyo, and therefore an ideal venue for this Championship.

In conjunction with the ASPACs the JLA also conducted the 2005 National Youth Championships, and showcased an Eastern Regional vs. a Western Regional Men’s game and a women’s club interleague game.

After the Union conference it was agreed that the ASPACs would be held every two years.

And so it was in April 2007 (1-7) that the event returned to the Southern Hemisphere, with New Zealand playing host to 4 Men’s teams, Australia U21, Japan U21, New Zealand and a combined Hong Kong/Korea team. These ASPACs were held earlier in the year than usual with average autumnal temperatures of 22-24 Celsius providing an ideal climate for lacrosse in Auckland before the winter rain and cold. The beauty of New Zealand provided a welcome country for participants to want to visit, where according to Maori legend when Kupe the great Maori navigator brought his wife to what is now known as New Zealand, all that could be seen was a heavy white mist covering the land. Kupe’s wife seeing this appropriately named it “Aotearoa” – Land of the Long White Cloud – and yet what lay behind the deceiving cloud was a place of incomprehensible beauty that convinced Kupe this was where he wished to make his home. Little has changed since, and the competitors of the 2007 ASPACs were in for many surprises that this beautiful and progressive country provides.

The welcoming opening Maori ceremony providing an indigenous flavour was conducted in the open on the edge of a playing field and all teams had their national anthem played by a local brass band with each team’s spokesperson speaking in support of the occasion and outlining their team’s aspirations in competing.

This event was the first time it was advised that there would be both an ASPAC Championship and an ASPAC Tournament, with all participating teams able to compete in the latter, but only ASPAC members being eligible to play off for the Championship trophy. However, because only ASPAC teams were competing this time there was no need for a concurrent tournament to be conducted. A women’s event was also scheduled but did not eventuate. There was a women’s demonstration game between New Zealand Seniors (14) Vs. New Zealand U19 (8). 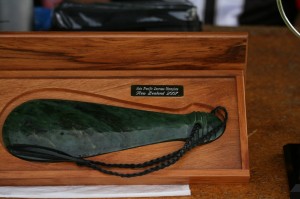 Over the first six days each team played all other teams twice in a round robin preliminary competition: This was then followed by a seventh day of finals which culminated in the winner receiving both the ASPAC trophy and a locally sourced New Zealand trophy. This sponsored NZ trophy was unique ~ a greenstone ‘skull cracker’ Maori war club presented in a shining wooden box to the Australian team who successfully defended their Asia Pacific crown.

At the 2007 Union General Meeting it was agreed that in future countries bidding to host the ASPAC Championship were to be present their proposal two years prior to the event. 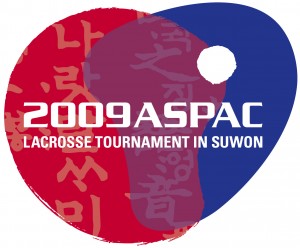 It would be a mere four years before the ASPACs would return to the Land of the Long White Cloud, however, fulfilling the agreement of the 2005 Union meeting to alternate the ASPAC Championship between the Northern and Southern Hemisphere it was South Korea’s opportunity to host in 2009.

Jinkyu Roh (KLA) was named coordinator of the ASPAC Championship in Suwon. 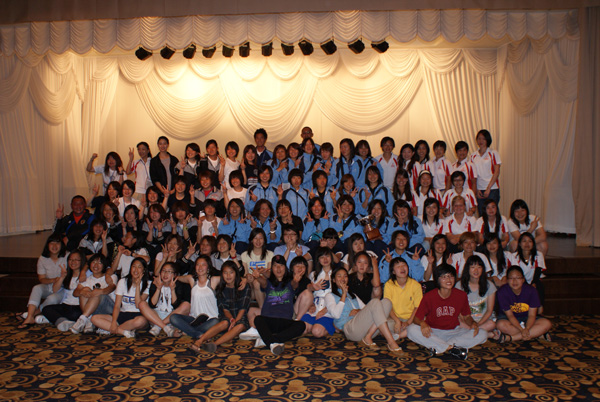 The first ever Women’s ASPAC Tournament was held ahead of the men’s event from the 8-13 June at the Suwon World Cup Stadium, with accommodation at the Ramada Plaza. There were five teams, Japan U22, Ehime University (Japan), Hong Kong, and two from Korea. Players stated they “enjoyed the tournament and had learnt and had improved a lot throughout the event.” The Women’s perpetual trophy was jointly donated by Japan and Australia and was presented to the Japan U22 winning team. A women lacrosse clinic was also held for all players during the tournament led by JLA coaches, and it was suggested to consider organizing exhibition games by players mixing from different teams in future. To compliment this a lacrosse clinic was conducted by the Women’s Japanese U22 Team and JLA for a local high school in Suwon. A focus on increasing women’s participation was highlighted at the General Meeting.

In the men’s event, which followed the women’s event at the same venue from 16-21 June, there were 6 teams, USA West (winners of the Tournament), Japan U22, Australia U22, Korea, Hong Kong and ASPAC United. It was unfortunate though that most players of the Aussie Roos U21 team were quarantined for Swine Flu and could not take part in the first few games of the tournament. The team members understood the difficulties for KLA having to deal with such a situation and appreciated the co-operation and support from all participating teams to help resolving the matter. On a more positive side it did result in considerable wide-spread media attention of the event, particularly in Australia! 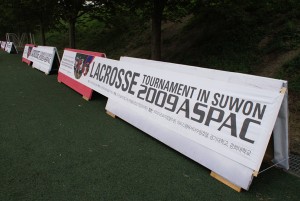 A Men’s ASPAC United Team also competed for the first time comprising players from Japan, Korea and Hong Kong. KLA designed the team uniform and JLA sponsored its production. This provided a great opportunity for players from different countries to share experiences and develop friendship ~ all initial aims of the 2004 inaugural APLU meeting. Five years on, at the 2009 General Meeting it was therefore agreed to continue this initiative in future ASPAC events (for both men and women) and possibly other regional competitions, with the APLU being responsible for the recruitment of players and an experienced coach to lead the teams.

At the 2009 APLU General Meeting held 17 & 18 June in Suwon there was general agreement that the ASPAC Championship should no longer be required to be held in the northern and southern hemispheres alternatively, with the rationale being that with the affiliation of new APLU countries this requirement could become non-practical to enforce. It was also agreed that the preferred time to conduct this event remained mid June to early July. 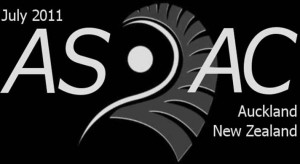 2011 saw the re-birth of New Zealand teams in the ASPAC competition when the event returned to Auckland this time boasting both a men’s and women’s team. The venue was the College Rifles Sports Complex in Auckland but this time it had moved to the cold and rain of the winter season from 3-8 July. Accommodation was at the Novotel/Ibis hotel group. This time the opening ceremony was conducted inside with formal welcome by the local iwi followed by an amazing kapa haka display.

The six men’s teams from Australia U23, Japan U22, New Zealand, Hong Kong, Lax Ratz and West Coast U21 competed for both the ASPAC Tournament Trophy and the ASPAC Championship trophy with the winner of both being the Japanese team. Balancing the field there were also six women’s teams from Australia U23, Japan U22, Hong Kong, Korea, New Zealand U19 and Kiwi All Starz (New Zealand). Japan was equally victorious in winning both trophies. 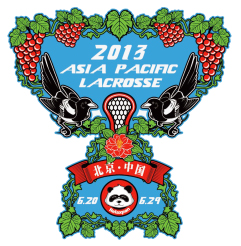 For 2013 the event had been awarded to an Associate Member for the first time, the China Lacrosse Association, with the aim being to showcase lacrosse as a ‘new’ sport in China and to increase the interest and local participation.
This Championship, held from 20-27 June in Beijing, boasted the largest number of participants with 8 men’s teams, Australia U23, China, Japan U22, Hong Kong, Korea, Singapore, Thailand and USA Starz and 6 women’s teams from Australia U23, China, Japan U21, Korea, Relax Pan, and USA Starz. Following on from their successes in 2011 Japan won the men’s and women’s tournament and championship trophies.

The Opening and Closing Ceremonies, and the Final match were held at the Olympic Sports Centre, which was constructed in 1990 for the Asian Games, and renovated in 2008 for the Summer Olympics. Round Robin matches were played at the Bayhood #9 golf course on artificial grass.

Two exciting and innovative events in 2013 saw the launch of the APLU logo and a fund-raising auction in which teams brought various items including lacrosse gear and uniforms and native artefacts. There was some keen interest in many of the items and ‘out-bidding’ ones opponent in the room brought some friendly rivalry away from the playing field!! 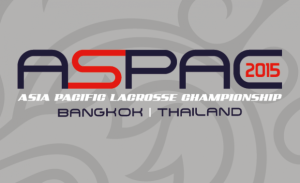 The 2015 ASPACs was hosted by the Thailand Lacrosse Association in Bangkok from 4-11 July, and comprised both men’s and women’s teams. 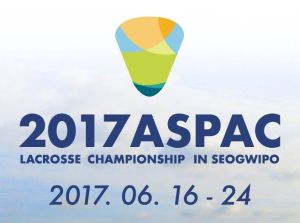 The 2017 ASPACs was hosted by the South Korea Association in Jeju from 16-24 June, and comprised both men’s and women’s teams.

In 2019 it was again Korea who offered to host the ASPAC tournament. This also included the first APLU qualification event for the Women to participate in the 2021 Women’s World Championship (subsequently delayed)