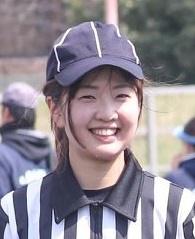 History will be made in Netanya, Israel at the 2018 Men’s World Championship for many reasons ~ the largest number of teams to ever compete in this event (46) ~ an inaugural Host World event for Israel ~ it will be the most watched men’s lacrosse event ever to be broadcast on Sport 5 in Israel, ESPN in the United States, and streamed to a world-wide audience ~ and participating will be the first woman from the Asia Pacific Region to referee at a Men’s World Lacrosse Championship in the history of the sport!

Congratulations to Natsumi Sasaki from Japan on her selection!

I had the opportunity to first meet Natsumi when I attended the 2018 Hong Kong Open at the end of April this year, and over the four days of the event I came to witness a young lady full of potential, growing in confidence, and earning her stripes as a respected Men’s Referee.

Following is a short Q&A with Natsumi:

(Natsumi) I joined the lacrosse team of Tsukuba University as a team staff in 2011 and started to referee in 2012 in the Kanto area. So, I’ve never played the game. In fact I had never watched a lacrosse game until I enrolled at the university. In other words, lacrosse was completely new to me when I started my studies at Tsukuba University.

(Natsumi) I became interested in refereeing by my senior team staff member. She was also a referee and had never played lacrosse, but participated actively in it.

(Natsumi) I don’t really know why, I just love men’s lacrosse and refereeing the game. But thanks to it I’ve made many friends across Japan and all over the world, and have encountered many new/different points of view as a referee. It is a great thing for me and something I really enjoy.

I’ve done national championships of college games and the International Friendship Games in 2017 and 2018 in Japan. As for overseas events, I joined the Hong Kong Open in 2018. This was my first overseas trip for refereeing. Israel will be my first international event.

(Natsumi) Yes, I had played basketball for around 10 years. But now I don’t play any sport.